Vascular malformations are common vascular birthmarks that occur in childhood.  They occur in approximately 0.3%-0.5% of the population.  The term “birthmark” has been used to describe a large number of skin irregularities that appear in infancy, including congenital nevi, salmon patches (“stork bites” on the neck and “angel kisses” on the forehead), hemangiomas, and vascular malformations, to name a few. 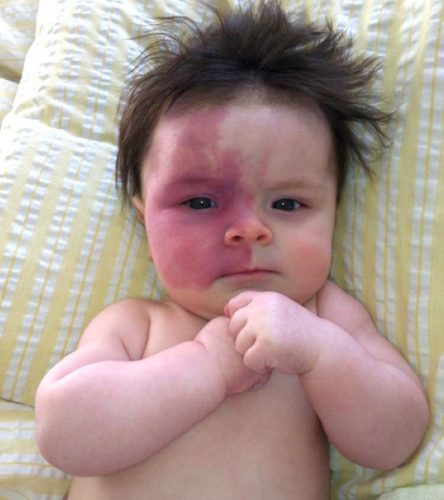 How are vascular malformations diagnosed?

The diagnosis of a vascular malformation is made based on patient history, physical examination, and imaging.  Imaging may be used to establish the diagnosis, follow the malformation over time, and plan treatment.  The type of imaging needed depends on the characteristics of the malformation, and may include magnetic resonance imaging (MRI), computed tomography (CT), and ultrasound.  In certain situations, angiography may be used.  This is a procedure performed by an interventional radiologist in which a catheter is inserted through a large blood vessel, typically in the leg, and dye is injected to better characterize the malformation.  Angiography can also be used to treat certain vascular malformations.

How are vascular malformations treated?

The management of vascular malformations depends of their type, location, and symptoms.  They do not improve spontaneously.  Patients with complex vascular malformations are best treated by a multidisciplinary team, including plastic surgeons, dermatologists, interventional radiologists, and hematologist-oncologists.  Patients are followed on a regular basis by a multidisciplinary team, and decisions are made based on the behavior of the malformation and the symptoms experienced by the patient, whether to monitor the malformation or treat it.  Since treatment options depend on the type of vascular malformation, the specific treatments will be outlined in the section below.  Examples of treatment modalities include observation, compression therapy, sclerotherapy, laser therapy, surgery, and chemotherapy (treatment with medications).

What are the types of vascular malformations?

Capillary malformations are quite common, occurring in approximately 3 in 1,000 births.  They are often called port wine stains.  They may occur anywhere on the body, and can range from small to quite extensive.  Unlike salmon patches (“stork bites” and “angel kisses”), capillary malformations do not spontaneously disappear.  They tend to thicken and darken with age, and the affected skin may become nodular or lumpy.

Depending on their location, capillary malformations may be a part of an associated condition.  Sturge-Weber syndrome includes a capillary malformation on one side of the face, in the distribution of one or more divisions of the trigeminal nerve.  Patients with this syndrome may also have leptomeningeal vascular anomalies, which are lesions involving the tissues surrounding the brain.  This can lead to seizures and developmental problems.  In addition, patients with Sturge-Weber syndrome may have vascular anomalies of the eye, which may lead to vision problems or blindness.  Patients suspected of having Sturge-Weber syndrome are evaluated by MRI of the brain, and referral to an ophthalmologist for evaluation and treatment if necessary.

Capillary malformations may also present on the limbs as a part of a combined vascular malformation.  When combined with lymphatic and venous malformations, it is called Klippel-Trenaunay syndrome.  When arteriovenous malformations are included, the diagnosis of Parkes Weber syndrome is made.  Limbs affected in these patients may show hemihypertrophy, or increased size of the limb compared to the unaffected side.

The most effective treatment of capillary malformations is laser therapy with a pulsed-dye laser.  Laser therapy may significantly lighten the lesion, and may prevent the skin from thickening.  Typically, multiple treatments are required, spaced out at 2-3 month intervals.  Patients with nodules or tissue overgrowth may benefit from surgical intervention.

Venous malformations consist of abnormal, dilated, malformed veins.  They may be localized, or involve a small part of the body, or more diffuse.  Their appearance depends on the depth beneath the skin, and the location on the body.  They tend to be soft, blue, compressible masses.  They often increase in size when the patient cries or bears down.

Venous malformations often grow proportionally with the patient.  They may increase in size during growth spurts such as puberty.  They may become painful and increase in size as a result of clots, or thrombi.  They may also become sore and lead to cramping after activity, particularly when they are in the legs and the patient has been active.  When present in the head and neck, they may lead to facial asymmetry or bleeding.  They may also lead to overgrowth, or hypertrophy, in the limbs or the head and neck region.

While most venous malformations are isolated, Blue-rubber bleb nevus syndrome is a condition which includes multiple rubbery blue lesions on the trunk, limbs, and soles of the feet.  There are also lesions in the gastrointestinal tract which may lead to bleeding and abdominal pain.  Treatment for this syndrome involves a gastroenterologist, and possible endoscopic or surgical treatment.

Management of venous malformations involves a multidisciplinary team.  Imaging, such as MRI and ultrasound, aids in monitoring the malformation over time, and helps in treatment planning.  Treatment may involve one or more of the following:

Arteriovenous malformations, or AVMs, involve a direct communication between the artery and the vein.  Typically, arteries branch into smaller arterioles, which branch into capillaries, which coalesce into venules, which drain into larger veins.  With AVMs, there is no intervening capillary bed between the artery and vein.  This may lead to pain, bleeding, enlargement, and even cardiac (heart) problems.  The most common location of AVMs is in the brain, followed by the limbs, trunk, and internal organs.

AVMs of the skin vary widely in appearance depending on the location.  They may not be visible, or may have accompanying skin discoloration.  With age, usually in adolescence, the AVM may enlarge and darken, and a palpable “thrill” (pulsatile blood flow) may be felt.  Both puberty and pregnancy may cause this change in the malformation.  Eventually, the AVM may become larger, become painful, and may bleed or ulcerate.  Certain lesions may lead to heart failure.

Small AVMs may be observed over time without needing treatment.  Bleeding, ulceration, disfigurement, and increased cardiac output (work of the heart) are indications for treatment.  Small AVMs may be treated with surgery alone.  For larger AVMs, arterial embolization of the feeding vessel is performed by an interventional radiologist.  This procedure involves introducing a catheter into a large artery, typically the femoral artery in the thigh, and injecting material into the feeding artery, or nidus, blocking or occluding it.  This is followed by surgical excision 24 to 48 hours later.

Microcystic lymphatic malformations are frequently located in the limbs, axillae, or chest.  They often appear as small vesicles, or “blisters” on the skin. It is difficult based on examination to determine the true extent of these malformations, and imaging in the form of MRI or ultrasound is helpful.

Combined lymphatic malformations consist of both large cystic components and smaller cysts.  They are frequently in the head and neck region, including the airway and the tongue.  They may also be seen in the extremities, chest, and pelvic regions.  In the head and neck region, these malformations may lead to bulkiness of the tongue.  They may also cause obstruction of the airway.  When the malformation involves the thorax (trunk), it may cause pericardial effusions (fluid around the heart) or pleural effusions (fluid around the lungs).  Lymphatic malformations in the extremities may lead to lymphedema, or swelling due to accumulation of lymphatic fluid, in the affected arm or leg. 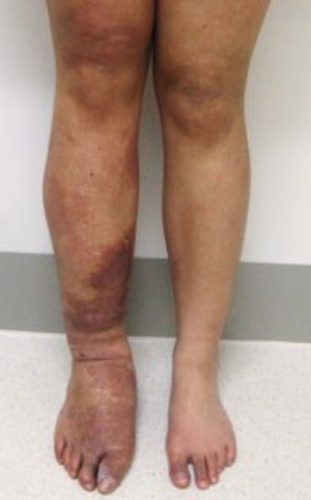 Klippel-Trenaunay syndromeKlippel-Trenaunay syndrome combines lymphatic, venous, and capillary malformations on one or more limbs.  This may lead to limb hypertrophy (overgrowth), including length discrepancies between affected and normal legs.  Treatment involves the use of compression garments, sclerotherapy of venous or lymphatic malformations when appropriate, and epiphysiodesis, in which the growth center of the bone is interrupted, allowing for correction of the asymmetry.