Hemangiomas are common vascular lesions (birthmarks) that occur in infancy. They are known by many other names, such as birthmarks or strawberry birthmarks.

The term “birthmark” has been used to describe a large number of skin irregularities that appear in infancy, including congenital nevi, salmon patches (nevus simplex, or “stork bites” on the neck and “angel kisses” on the forehead), and vascular malformations, to name a few.  They are a very specific type of birthmark, and are managed differently than other categories.

Hemangiomas, or infantile hemangiomas, are quite common.  They occur in up to 5-10% of infants.  The exact cause is not known.  Hemangiomas are tumors which grow from a specific cell type, known as hemangioma-initiating multipotent stem cell.  These cells express a protein called erythrocyte-type glucose transporter protein-1, or GLUT-1.  This protein can be useful when the diagnosis of hemangioma is in question; it can be detected by the pathologist from a biopsy specimen.

How do hemangiomas present and behave?

Infantile hemangiomas are usually seen at or soon after birth, within the first 2 weeks.  After appearing, they go through 3 phases: the proliferative phase, the involuting phase, and the involuted phase.  The proliferative phase is a period of rapid growth of the hemangioma, which usually occurs during the first 6-8 months.  This growth phase is typically completed by one year of age.  The appearance of the hemangioma during and immediately following the proliferative phase depends on where it exists on the skin and deeper tissues.  Cutaneous hemangiomas, which are on the most superficial or outer layer of the skin, are elevated, spongy, and bright red.  Those that are deeper in the skin and subcutaneous tissues (the layers below the skin) are soft masses.  The overlying skin tends to have a splotchy, bluish appearance.

The involuted phase occurs after involution, or regression, of the hemangioma is complete.  In many children, the hemangioma disappears completely, resulting in normal-appearing skin.  Some children have some skin color changes or telangiectasias (small “spider veins”).  Large or bulky hemangiomas may not disappear completely.  They may have residual bulk, or overlying skin changes.

Can hemangiomas cause problems?

Most do not cause any problems and resolve without needing any treatment.  There are circumstances, however, in which infantile hemangiomas may be problematic and require early treatment.  The most frequent complication is ulceration.  This typically occurs in larger lesions, in areas prone to rubbing and irritation.  Ulceration can lead to bleeding.  While this may be dramatic, bleeding can be easily stopped with a few minutes of pressure.  Ulceration or recurrent bleeding may necessitate early treatment.

Hemangiomas may also cause problems due to their location.  Large hemangiomas of the eyelid or eye region may obstruct vision out of that eye.  This is important because in the developing child, obstructed vision in one eye may lead to amblyopia, or reduced vision secondary to problems with communication between the eye and the brain.  Large hemangiomas in areas with cartilage, such as the nose or ear, may distort the cartilage.  When present in the airway they may place the child at risk for breathing difficulties.

Finally, and very rarely, patients with very large facial hemangiomas or greater than 5 hemangiomas may be at risk for having hemangiomas on the inside of the body, a condition called “visceral hemangiomatosis”. Typically, this involves the liver, but may involve the gastrointestinal tract, brain, or lungs.

How are hemangiomas diagnosed?

Patient history and examination is usually sufficient for diagnosis of infantile hemangiomas.  When there is a question, biopsies, or small tissue samples, can be performed to confirm the diagnosis.

How are hemangiomas treated?

The vast majority of hemangiomas require no treatment.  The hemangioma will increase in size over the proliferative phase during the first year, and decrease in size through the involuting phase throughout early childhood.  It is often tempting to consider surgical excision early, as the birthmark can be a source of concern for parents and family members.  It is important to recognize that surgery would exchange the hemangioma for a scar, which would be with the patient throughout their life.  There are, however, circumstance in which treatment is appropriate.

Problematic hemangiomas, such as ulcerated hemangiomas, or those distorting tissues or blocking the vision of one eye, may need to be treated by medication or surgery.  Until recently, the most common medical treatment for hemangiomas was steroid injection into the hemangioma, or steroids taken by mouth.  Recently, however, a medication called propranolol, which is typically used for heart and blood pressure problems, has been shown to be very effective for the treatment of hemangiomas during the proliferative phase.  It often rapidly induces involution of the hemangioma, which may begin within weeks of therapy.  Propranolol is generally safe, but may cause hypotension (low blood pressure), bradycardia (slow heart rate), and hypoglycemia (low blood sugar); start of therapy is thus closely supervised by a physician. 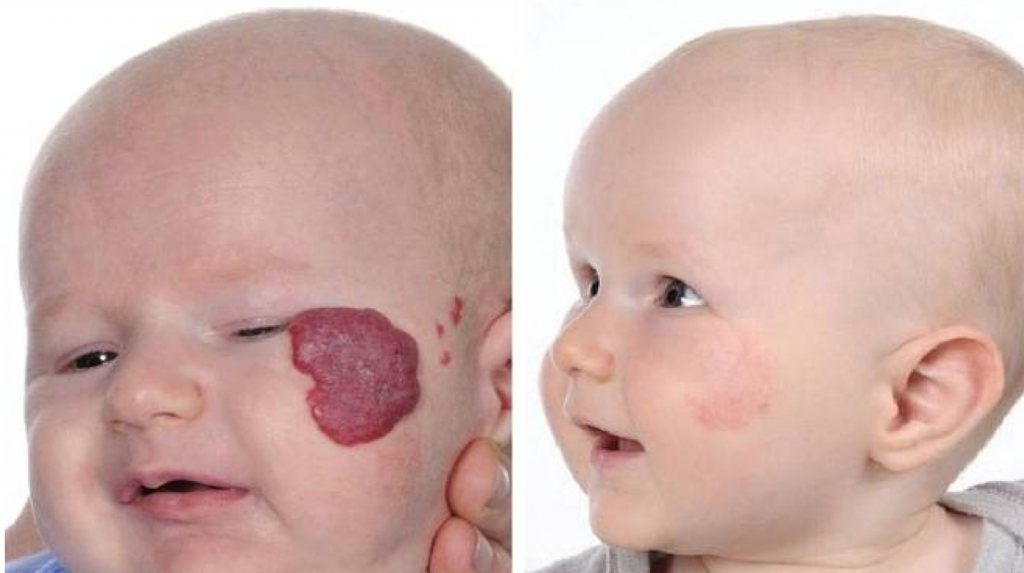 Surgery is reserved for the following: 1) hemangiomas in problematic areas that are refractory to or not candidates for medical treatment, 2) ulceration 3) visible and bothersome after the involuting phase is complete.  For the last category, it is important to delay surgery until involution is complete to determine whether surgery is necessary, and to limit the extent of surgery.