Help! My baby’s head is shaped funny: What is Deformational or Positional Plagiocephaly?

Deformational plagiocephaly is a very common diagnosis in babies. Plagiocephaly means misshapened or asymmetrically-shaped head. Typically the skull appears flattened in one area – right or left back of head, but can be both (brachycephaly).

The majority of patients are managed by their pediatricians; however some of those patients get referred to the Craniofacial Team of Texas by pediatricians if there is a concern that the head shape is not improving or is worsening. 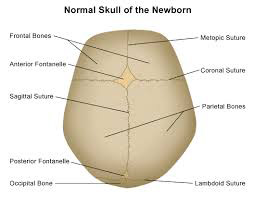 The human skull is made up of different bone plates which are connected by cranial sutures and the fontanelles; there are four major sutures – Sagittal, Coronal (Paired), Metopic, and Lambdoid (paired). The sutures and fontanelles help the head pass through the birth canal by allowing the head to deform. Additionally, the sutures are important centers for growth so that the skull can accommodate the rapidly growing brain. Aside from the metopic suture, the cranial sutures usually fuse during adulthood however if there is early fusion in a baby then this condition is called craniosynostosis. When the suture fuses too early, there is restriction of growth of the brain which can affect a baby’s development and vision. The most common form of craniosynostosis is sagittal where the suture that runs down the middle of the skull fuses. When a single suture fuses, it makes a very characteristic head shape – see picture of sagittal craniosynostosis CT scan, which compared to normal skull with open sagittal suture, the head is long and narrow. 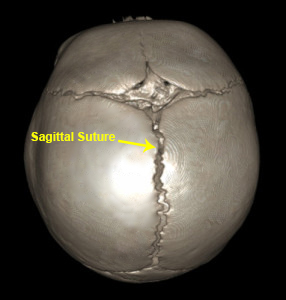 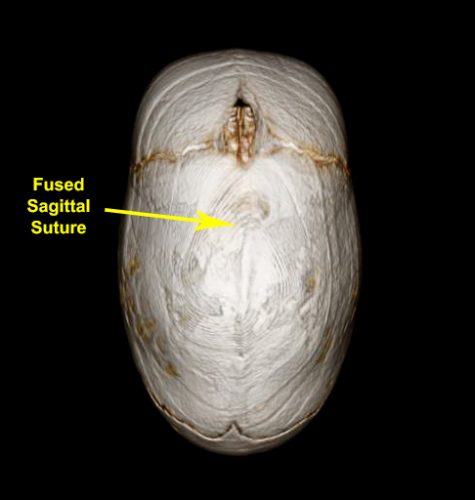 Deformational plagiocephaly occurs because a baby’s skull bones are thin and very pliable compared to an adult skull and thus are sensitive to external forces. Interestingly, in some cultures, this ability to mold the head was taken advantage of to create certain head shapes. The picture to the right shows an example of a skull that had undergone artificial cranial deformation as a baby.

Who has an increased chance of developing positional plagiocephaly?

Several conditions can increase the chance that a baby will develop plagiocephaly. When a mother is pregnant with multiple babies (such as twins or triplets), the babies may be too crowded to move about freely in the womb, therefore receiving constant pressure on their skulls. Babies born to mothers with unusually-shaped wombs or uterine fibroids may also be crowded before birth.

Once born, all babies have some pressure on their skulls from such things as mattresses and baby carriers. However, infants who cannot or do not move from one position to another may develop flattened skulls from this pressure. For example, premature infants can develop plagiocephaly because their skull bones are softer than those of full-term babies, and they cannot move their heads as easily. In addition, babies with medical problems or delayed development may have difficulty moving from one position to another, increasing their chance for plagiocephaly.

Infants with torticollis (a condition causing limited movement of the neck) have a strong preference to look in one direction (head tilt) and may also develop skull asymmetry.

Most health care providers encourage parents to put their babies to sleep on their backs to reduce the risk of SIDS (Sudden Infant Death Syndrome). If, in addition to sleeping on their backs, infants also spend many daytime hours on their backs or in firm baby carriers, they may have pressure on the backs of their heads almost constantly. These babies may develop flattened head shapes.

What Can Be Done at Home to Treat Positional Plagiocephaly?

If your baby is less than six months old, you should reposition his or her head frequently. Keep your baby off the flat area of the head as much as possible. Increase supervised “tummy time” by placing your baby on his or her stomach as much as possible during waking hours (1-2 hours/day broken up into 10-15 minute sessions). Limit your use of infant carriers, and use front carriers or backpacks instead. You can work on developing core strength by using a Bumbo© or Boppy© with supervision; starting around 4 months of age (if good neck control). If your baby has torticollis, ask your doctor about exercises you can do with your infant (see video below). You may also want to see a physical therapist who can improve your baby’s ability to move his or her neck in all directions.

Here are some examples to help improve your child’s neck mobility (if your baby has torticollis) and strategies to alleviate pressure on the back of the head.